Video game currencies have been stricken off an official IRS guidance as examples of virtual currencies, as the agency ups its scrutiny of crypto transactions.

The Internal Revenue Service (IRS) removed wording on its website that put game currencies as examples of a convertible virtual currency. This clarification is important as a new tax filing requirement obliges taxpayers to report whether they dealt with virtual currencies.

The move was first reported by Bloomberg Tax on Feb. 13. Official guidelines on the IRS website indicated Fortnite’s V-bucks and Roblox’s Robux as examples of virtual currencies. A screenshot captured by Bloomberg Tax shows a fairly detailed explanation of the concept, even mentioning blockchain alternatives such as the Directed Acyclic Graph (DAG). 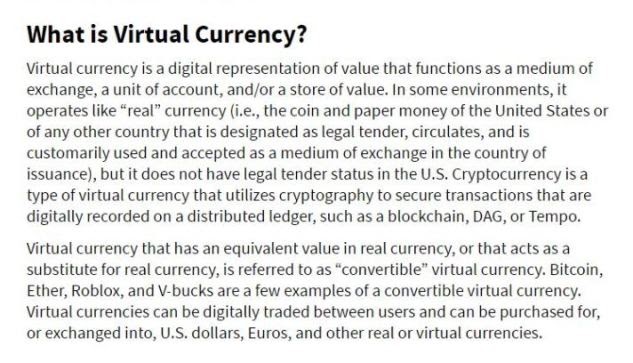 Poor examples of a virtual currency

The IRS definition of a virtual currency hinges on its ability to “operate like ‘real’ currency,” which means that it needs to be freely transferable between users and easy to exchange for fiat currency.

Spokesmen from Epic Games, Fortnite’s publisher, told Bloomberg that none of these apply to the game’s currency:

“V-Bucks cannot ‘be digitally traded between users,’ nor can they be ‘exchanged into, U.S. dollars, Euros, and other real or virtual currencies.’”

Roblox representatives voiced a similar stance, noting however that Robucks can be exchanged for fiat money under specific circumstances. The transaction is automatically submitted to the IRS, the company added.

The revised guidelines only mention Bitcoin (BTC), striking off a previously existing reference to Ether (ETH) — which should fall under the definition.

The U.S. tax enforcement agency has recently made a strong move in its efforts to curb perceived tax evasion facilitated by crypto. Form 1040 now features a straightforward question:

“At any time during 2019, did you receive, sell, send, exchange, or otherwise acquire any financial interest in any virtual currency?”

Categorizing game money as a virtual currency would have led to millions of people having to answer “yes” to this question. There are generally few profits to be made from owning game currencies, however.

Given that lying on the form can cost up to $250,000 in fines, this measure was likely introduced to force cryptocurrency users to go through the effort of reporting their gains.

Doing so is likely to be quite complicated. For example, each crypto-to-crypto exchange is considered as a taxable event that has to be reported. Though some hoped that these fall under the definition of a “like-kind exchange,” an IRS official denied this. This definition would have meant that cryptocurrency gains are only taxed when converting to fiat currency.

Cryptocurrency taxation remains an unclear subject, with worldwide regulators having widely diverging approaches. As an example, France does not tax crypto-to-crypto transactions.

A new bill recently proposed in the U.S. Congress could ease the use of crypto for payments by exempting low value transactions from tax returns.