Yesterday, the investment bank of Goldman Sachs announced that it was restarting its crypto and Bitcoin trading desk next amidst increased demand for the investment products surrounding digital assets. According to Reuters, the bank is also ‘exploring the potential for a Bitcoin Exchange Traded Fund and has issued a request for information to explore digital asset custody’.

In response to the news of Goldman Sachs re-entering the Bitcoin and crypto space, Veteran trader, Peter Brandt, warned that whenever the bank entered a specific market, it was time for investors to guard their money. Mr. Brandt’s Twitter commentary on the news can be found below alongside a chart he shared to further illustrate his idea.

Us old-timers have learned that whenever GoldmanSachs enters a market niche it is time to guard your money. $BTC 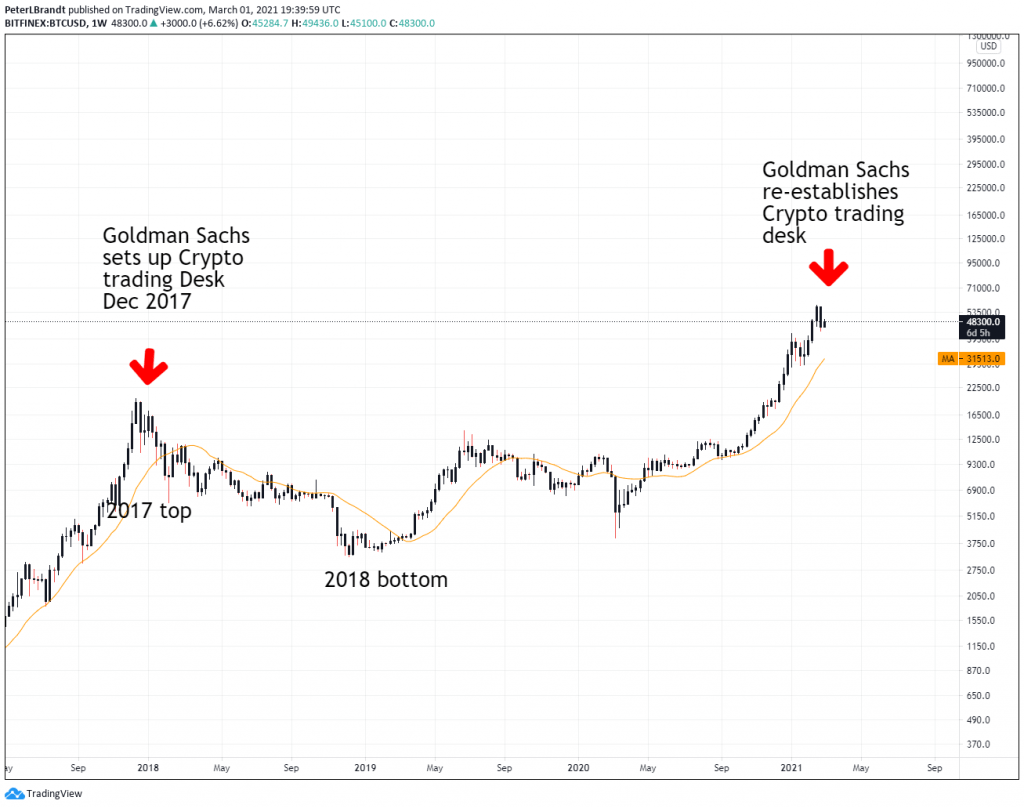 Mr. Brandt went on to further elaborate his statement by forecasting that Goldman Sachs has probably figured out a new way of profiting from the crypto markets and it was time to be cautious.

Most ppl assumed my implication is that BTC has topped/is topping. This Tweet was intended to point out that Goldman’s involvement in any/all markets means the firm has figured out a new angle to take skin from their clients.

This Time, It is Different

As Goldman Sachs made public their plans of reentering the crypto markets, the CEO of Microstrategy, Michael Saylor, announced that the company had bought an additional 328 Bitcoins for approximately $15 million. Mr. Saylor also added that the company now held 90,859 BTC valued at roughly $2.186 Billion and purchased at an average price of $24k.

Mr. Saylor also chimed in on the Goldman Sachs news by stating that the bank’s reentry will strengthen institutional adoption and pave the way for other banks to offer Bitcoin services.

Therefore, and using Mr. Saylor’s take on the matter, the reentry by Goldman Sachs might be bullish for Bitcoin afterall.